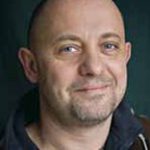 When he was just a teenager, at the early age of 16, seeing films like The empire strikes back, Gremlins and the dark crystal inspired him to pursue a career in sculpting creatures, making masks, models and puppets. Years later, he would actually get to work for the Star wars franchise, shaping up none other than Darth Vader’s new look as well as other costumes and pieces of jewellery.

Moving to the UK in 2005, Martin Rezard got to work together with the great team of Neal Scanlan on Prometheus, The Force Awakens and Rogue One designing and sculpting many creatures. He was also involved in some great designs for the goblins and giants in Harry Potter and the Deathly Hallows.

While these projects would have been already a dream come true for many, Martin Rezard also got to contribute to the artistry of one of the most watched and influential TV series ever: Game of Thrones, shaping up the infamous White Walkers villains. During a one of a kind event, Martin will show and discuss his work in an interview on stage while sculpting live, in both days of Playgrounds: The Art Department.