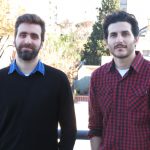 From branding for TV channels to animation for advertising agencies and clients worldwide: design and motion graphics studio 2Veinte  exemplifies the cutting edge of the new generation, making their mark with bold colours and a penchant for the surreal. 2veinte is a heavily-awarded production company based in Buenos Aires, Argentina internationally recognised for its design and animation projects. Lead by a super talented and passionate team, 2veinte’s crew is driven by creativity and hard work, always willing to add that special and creative touch that distinguishes them.

The studio combines commercial work with non-commercial projects such as experimental shorts. Several of those, such as Ricochet Splendid, Psychic Land, Wild & Woolly and 100 years Armenian Genocide, have been selected and showcased at more than 50 animation and film festivals all over the world.

Among their more recent works are the animated campaign for the Adidas – Real Madrid collaboration, creating the videogame trailer for Rollerdome as well as contributing to the Kill Team Kill episode of Netflix’s series Love, Death and Robots.