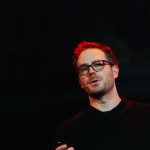 Some people might still refer to him as the mastermind behind Witch Doctor promo and Modular Body video-project. Yet Floris Kaayk’s  buzz and status as a Dutch digital artist-to-watch, pushes beyond this. Each new project is a global viral phenomenon and he always finds exciting ways to challenge our visual senses. In his latest project Next Space Rebels, Kaayk creates a game focused on building DIY rockets and, at the same time, exposing real concerns about an increasingly regulated internet.

Floris Kaayk’s visual stories are like prophecies of the future of technology and really the future of digital art, digital creation, altogether. Among his famous projects are The Modular Body, the Unity game environment of Jheronymus Bosch’s classic medieval depiction of hell, cleverly titled Hell.exe, and the online alter ego as the new Leonardo DaVinci for Human Birdwings.  He also co-created (with Studio Smack) De Staat’s digital hooligan spectacle for the music video Witch Doctor.