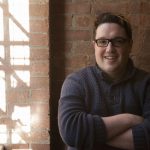 David Sheldon-Hicks is the co-founder and executive creative director at Territory Studio. With a background in graphic design, David’s career began in digital media before moving on to the fast-moving world of music videos, where his passion for the craft and creative of motion graphics led him to film, games and commercial campaigns.

As co-founder and Executive Creative Director of Territory Studio, David’s, love of storytelling and technology, and eye for emotive details has established a reputation for beautifully crafted, design-led graphic narratives across genres and media.