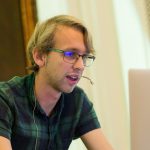 Leon Tukker is a freelance concept/environment/3D artist and animator living in Utrecht, the Netherlands. As a kid he really liked to play with legos which, he considers, is what sparked the creative little being inside of him! His works were further influenced by a love for science fiction movies and games. He likes to combine abstract shapes with vibrant colors as well as creating weird alien worlds and giant cityscapes.

Over the past year he has worked for clients like: Axis Studios, Wizards of the coast, Paramount Pictures, Paizo Publishing and the Dutch game company Keoken Interactive. In his spare time he likes to compete in high jump and running competitions, as well as playing boardgames.