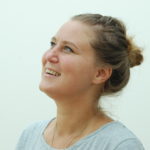 Next talent Josefien van Kooten has an intriguing theme in all her work: the role that the filmmaker takes during filming. The way she explores this fascination makes her films very interesting and relevant, according to the partners of the Next talent trajectory. Josefien van Kooten graduated as documentary filmmaker in 2011 at the St. Joost Art Academy in Breda. Initially she started her studies at the fine arts department but after two years she switched to the audio-visual department to study documentary film.

In her graduation movie ‘All The Pretty Little Horses’ she researches her troubled relationship with her father. After that she made two short documentaries together with Anna Witte. In the movie ‘Good People’ the two directors investigate their own position during filming refugees that arrive on the shores of the Greek island of Lesvos. In 2016 this documentary won the ‘BN deStem Cultuurprijs’ for short films.

Josefien created the short Teledoc-Campus documentary ‘Honds’ for the KRO-NCRV. The film created a lot of commotion among dog owners and lovers.

Besides directing for her own films Josefien is also sometimes active as an editor for documentary films. She sees the process of editing as the most important aspect of filmmaking: in the editing process everything comes together and most creative and impactful choices are made.