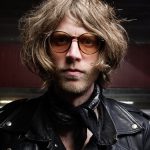 Music videos for Demi Gods of the music industry, directing the visuals for Beyonce’s formation global tour, commercials for hip brands, but also virtual reality for top museums around the world. Yes, it is a strange mix. A mix so strange advertising agencies are now begging Geoffrey to tell them how to make online media more immersive.

The work of Geoffrey Lillemon is hard to describe: Dirty? Yes! Flashy? Indeed! Digital design? Well… More like digital pop art, pop propaganda, pop pastiche. Pretty? No, better! More like violent sexy silly crazy, disturbing Disney-esque gone superbly wrong. No surprise this mix of extravagant visual styles is perfect for pop culture and pop infiltration for the masses: Geoffrey Lillemon is a weird digital artist and his digital signature style works in a museum and in a commercial and in a music video and in a music concert of a pop goddess of your choice.

Altogether Geoffrey Lillemon’s work is a crazy but colorful mix of all that is visually nasty and nice, but it packs a shiny, glitter packed punch just as much as it criticizes digital culture altogether.