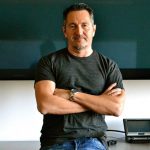 Art director for Finding Nemo and Wall-e, character and environment designer for Cars and production artist for The Incredibles... not our dream, impossible-to-achieve, resume but actual highlights from Anthony Christov's spectacular career. Originally born and raised in Sofia, he left Bulgaria shortly before graduating from the National Fine Arts School ‘Iliya Petrov’. This didn’t stop him pursuing a career in USA, his incredible talent prompting him to collaborate with some of the biggest studios in the industry: The Walt Disney Company, Universal, Warner Bros and 20th Century Fox. TITAN AE, LAND BEFORE TIME and RESCUERS DOWN UNDER are just some of the noteworthy productions he brought his contribution to. In March 2000 he joined Pixar and helped develop some of the studio’s most well known and loved, by children and adults alike, productions. Aside from working at Pixar, he is currently also a lecturer at the Art Academy in San Francisco and is the director of IDEA Academy in Rome.