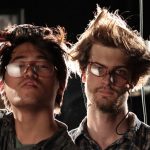 As any music videos aficionado might be able to tell you, Daniels have a unique storytelling style equally mind-blowing and addictive. They have collaborated with Passion Pit, Foster the People and Tenacious D, among others, as well as created the smashing viral hit Turn Down for What for DJ Snake + Lil Jon. In the past years they also took cinemas by storm with their spectacular feature-films. Daniels are Daniel Kwan and Daniel Scheinert. They consider themselves interchangeable, which fits in with their mixture of live action and animation, and the sense of humor apparent in both their films and personae. Scheindert about The Hundreds in the Hands video ‘Pigeons’: “We have a reputation for being special effects guys, but we’re like an effects artist’s nightmare because we make things up as we go. While 3D animation is usually all about this mathematical precision of creating detailed drop-shadows and back reflections, we just wanted to see if we could make a girl throw up fireworks.” By the way, Kwan and Scheinert are also freelance babysitters and back-up dancers, so no excuse not to hire them.

The duo has collaborated with Passion Pit, Foster the People and Tenacious D, among others, as well as created the smashing viral hit Turn Down for What for DJ Snake + Lil Jon.

Also very particular and remarkable about Daniels is the way they smoothly transitioned to directing feature-length movies, equally thought-provoking and beautifully executed as their promos and commercial works. Their latest feature Everything Everywhere At Once, follows a Chinese immigrant that gets unwillingly embroiled in an epic adventure where she must connect different versions of herself in the parallel universe to stop someone who intends to harm the multiverse.