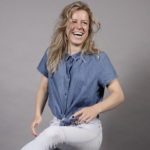 For Marieke Widlak (1993), filmmaking starts by reflecting on the larger aspects of life, specifically those that people tend to ignore in their everyday routines. She examines these complex themes in stories close to her home. By using these stories she makes it evident and apprehensible. Marieke is selected as a Next Talent. Initially, Marieke studied to become a spatial designer. However, in her final year she decided to make a film. A very personal story in her mind made her choose documentary as the perfect medium to convey her story. In 2018 she graduated at the Willem de Kooning Academy Art school in Rotterdam with her film: Now or Never Again. The film received the Wildcard of the Dutch Film Fund, the Willem de Kooning ”Drempelprijs”, the award for ‘best debut’ at the Eindhoven Film Festival and the award for ‘best film’ at the Tilburg Film Festival. Moreover, the documentary has been screened on the Dutch and Belgium national television and several film festivals.

Marieke is currently employed as a director at Korrel Film, a Rotterdam based Film Production Company. Here she is working on a new documentary within the Teledoc Campus trajectory about the charitable work of her grandparents. Besides she is doing research for the Wildcard film project.

The partners believe Marieke is an artist who chooses the medium that fits the story best. Her background as a spatial designer makes that she takes unconventional decisions in her filmmaking process. These curves makes her films interesting and exciting.