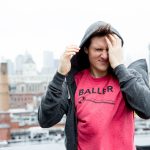 Brooklyn-based director, thinker and maker Aaron Duffy loves visual communications and applies it to find new ways to make viewers think and smile. It earned him clients like Google, Okgo and Birdstatic, and a ranking in business insider’s list of most creative people in advertising under 30. Despite his young age (he starting working as a director when he was 23), Duffy already had his work featured at the Saatchi&Saatchi new director’s showcase, and inducted into the MoMA’s archive for the art and technique of the America Commercial. He co-founded his own creative shop called SpecialGuest, is an avid crocheter and has a pet turtle named Chevy.