It’s the first time we actually interview two Next Talents in the same time and, as it turns out, it’s in many ways a stroke of luck. Because, as both Alina and Juliana acknowledge (and pretty much any Nexter we’ve ever talked to can confirm) relationships with fellow or alumni talents are quite a thing in the Next program. They not only support each other’s works, but would also chat on a regular basis, reflect on their projects or simply check in with each other from time to time. Alina actually calls it “one big family” while Juliana mentions that prior to joining the program she really didn’t expect that the Nexters would also check up on each other also emotionally, not just work related.

As a piece of advice for future talents in the program, Juliana says: “Be open and talk about your project not only with the mentors, but also with your peers. Next is not only about creating a film or a project but also about personal growth as an artist. Getting inspired. Sharing experiences and struggles with people that are going through similar things can really help push you further.” “You don’t come in this program for learning the technical stuff”, Alina adds, “but for networking, for meeting the community, exploring a big diversity of styles and seeing the possibilities.” 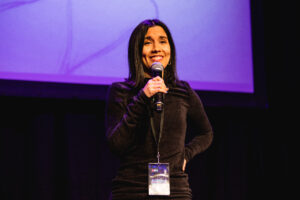 And when it comes to fresh perspectives and opening horizons, both ladies showcase strong resumes. Alina Milkina is a Ukrainian film director and animator, currently based in Netherlands. She did the master animation at St. Joost, while her short film Morning Grass was selected for Annecy in 2021. Through the Next Talent program she is currently working on a documentary project about roots, family and experiences of her parents.

“To be honest the idea formed quite recently” Alina says. “I was quite hesitant about this being really what I wanted to do. In general I think I am quite a hesitant artist. The working title for project is ‘There was no sex in USSR’ and it’s a documentary about the memories of my parents regarding their youth years. About how they experienced life. Regardless of what one might expect, it’s actually a documentary about mostly good stuff though”, she chuckles. “I started working on the script, working with a script coach. I am very happy about that because I am good at writing but sometimes not so good at writing scripts. I think my next step will be just starting making visuals and seeing where they will lead me in relation with the text. I hope it will catch shape soon. I feel very confident in the help and guidance I get through the program. Mostly because I don’t feel alone in this project.” 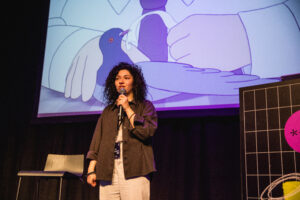 With the ongoing war in Ukraine, her project suddenly gained extra emotional layers. We asked Alina to elaborate on that: ”The current situation is definitely influencing the project itself. Or better said, it’s influencing me. But it’s also given another connotation to the project because now I have even more reasons to make it happen. One of them being the idea of re-finding my home. We all lose home in a way… some people just move to other countries, others experience the loss in different ways. For me, as with many of my friends from around the world right now who had to leave their homes, is very important to have another home. And I think we each find our homes in different things. Some find it in other people, some of us find it in our art, or in memories… As far as I am concerned,  this project is making another home for me. I really hope my parents will like this film as well. It’s also for them.”

Juliana Erazo is no stranger to being an artist in a difficult political contexts. She is a Colombian visual artist and graduate of an Animation Master at AKV. St. Joost. Her work focuses deeply on reflecting the female experience in different contexts and cultures that make up different struggles: from body normativity, sexuality and motherhood. Juliana is currently developing an animated documentary.

“The climate in my country has always influenced me because we are a very unstable country politically and socially. Just when I was preparing to arrive in Europe for The Art Department World Tour, there was a civil insurgence happening in Colombia at that time. Unfortunately not an uncommon occurrence, as something like this tends to happen every year. And it definitely influences my points of view, my positioning to wanting to do more about social issues and equality and those types of themes. These events really opened my eyes a lot about the artist that I want to be. But in this particular situation, on top of the unrest there was also the Covid pandemic happening.”

“What I remember from that time was that Paulien, Maureen and the Playgrounds crew were very helpful and offered to make all sort of arrangements needed to get me in the Netherlands and get me on track with the Next trajectory. And that care really meant a lot. Alina, you were mentioning the idea of a ‘home’. This program was in many ways our ‘home away from home’. I really feel part of a family for sure!”. “There’s a very big human aspect involved in the program” adds Alina.

Being involved in The Art Department World Tour also proved a good opportunity for Juliana to join the Talent Stage, a chance for young talents to present their works during The Art Department 2022 in Eindhoven. “Last year I was part of the World Tour, hosting a panel discussion. I really enjoyed the experience and Paulien [n.ed Paulien Mandos is the one of the Next Talent coordinators] thought I also did a good job with speaking in front of an audience. As she was also involved in organising the Talent Stage, Paulien suggested that I make a presentation and let other people know how the project was coming together. She thought I would be a good fit and it would be nice to sort of let people see the process of witnessing a project being born right under their eyes. And of course, I said yes.” Juliana continues: “After attending the Talent Stage during The Art Department Eindhoven I went on and I had some meetings with producers and that really helped me get the word out. Not to mention, it helped me get a producer attached, Richard Valk from Valk Productions. He was also producing another film from the Next Talent hub and then he decided he was also going to help me on my journey… I have the idea, I have done the research, I know what I want to do. It’s now just a matter of script-development, story-boarding, applying for funding.”

We can’t help but wonder how the two talents manage the fact that they are in slightly different stages with their projects. And not just with each other, but also with other talents.

“It’s impossible not to compare” Alina says, “but it’s a sort of white jealousy. You are in the same time really happy for the achievements of another Nexter, but you do want the same thing for yourself. What is very important, and also a good message to share with people that might want to join this program, is to understand that every talent has its own path. Often it’s very easy to forget what you have already achieved. And sometimes serendipity and seeing where things lead you as opposed to forcing things on a certain path, can also play an important role.”

We cannot but agree, the double-interview is more a result of a happy accident than of a rigorous planning.

Yet we get to witness in front of our eyes how legitimate the Nexters bond actually is, something inspiring us to pursue such talks also in the future. To wrap things up, we ask both Alina and Juliana to provide us with some tips about fresh talents attending events like The Art Department.

“Don’t feel pressured to do anything” Alina says. “If you discover that you simply want to stay in the rooms and enjoy the talks, just go ahead and do that without feeling that ‘oh, I have to mingle, I have to show my work’”. “True”, Juliana adds, “but if, on the other hand you do want to present your work, don’t be afraid to do so. Don’t be afraid to approach people, even if they are the well known artists that have just stepped off the big stage. Just try not to approach people while they are on their way to the bathroom! Nobody wants to have talks then!”